I remember well the day I got a call from New York and someone left a message on my phone claiming to be from Esquire Magazine.  My first thought was that it was the work of one of my friends who just loves to play practical jokes on me. Nonetheless I was in intrigued enough to call back. And sure enough it was legit. Not only were they interested in the clothes I was wearing, they were going to fly a crew all the way out to Seattle to do a photo shoot of me. Sure enough they showed up with a crew of about five people including makeup artists and lots of minions running around with various suits for me to wear. It was actually a lot of fun but it took almost 4 hours while they dithered over the perfect combinations for me to wear.

Finally they got down to business and the lights started popping.  What I found most interesting is that they weren’t at all interested in the styles that I was wearing. They were interested in what they wanted to put on me from various clothing lines that I imagine they were interested in featuring.  So for example, they had me wearing shoes that cost somewhere in the neighborhood of $1,000. Now I cringe when I have to pay one 10th of that for a pair of shoes. The shirt, the ties, the pants, all of it was off-the-charts expensive. I guess it turned out okay but I still have a lot of my friends giving me a hard time saying; “Seriously dude! You wear thousand dollars shoes!” To which I reply, “Well, I wore them while they were here but they didn’t leave them behind! Oh well, back to standard loafers.

Of course I do have a lot of fun as part of the job.   It’s the case whether it’s dressing up for a stint as a Seafair clown.  Or perhaps it’s interacting with 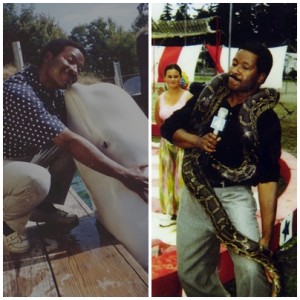 all sorts of zoo animals as part of a live remote. I’ve held animals of every type, from turkeys to ferrets, bear cubs, lizards, eagles, lambs, and piglets, or as you can see large snakes and a beluga whale that suddenly became so enamored with me it  decided to give me a kiss.  I have to admit it is kind of fun but boy, does that make my clothes smell nice in the car on the way back to the station. I have been lucky in that only one animal truly freaked out on me on the air. A piglet went berserk when I mentioned that after the show I was going to get a bacon burger for dinner!