On the plane flying to the east coast I kept thinking, what am I getting myself into? The first morning actually went well and after that I started doing the show on a regular basis. In all  I did stints 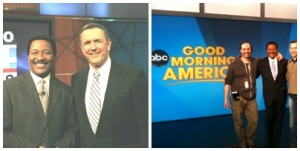 on GMA  from the late 80s through 2011. I made many close friends including Charles Gibson and many more people behind the scenes. The added bonus was being on set for the parade of celebrities that came though the studio. I met numerous actors, politicians, authors, models and music icons. Here is one of 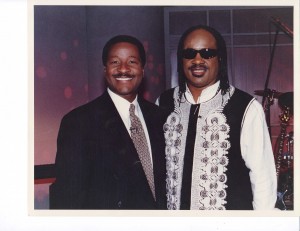 them. Stevie Wonder.  I have always been a huge fan.  I think I have just about every thing he has ever recorded. He played his hit songs about 10 feet away from me. Totally surreal. After that I met him and this picture was taken by the ABC publicity staff. In addition to Stevie Wonder  there was  Damon Wayans, Barbara Walters, Henry Winkler and everyone from Ross Perot (Who by the way had the largest ears I have ever seen on a human being.) to Sissy Spacek,  and Al Gore.

Perhaps the oddest recognition event for me occurred as I was having breakfast in a New York deli one morning after the show. A woman kept eyeing me and smiling. Of course I kept turning around behind me to see whom she was looking at. Finally, she screws up the courage to come over to my table.“I enjoy all your movies!” she says. Now, I’ve had bit parts in a few movies, but Denzel has nothing to fear, so I’m wondering what she’s talking about.“I think you have me mistaken for someone else,” I say.“I don’t think so,” she replies. “Aren’t you Carl Weathers?” Huh?? Turns out she thinks I’m none other than Apollo Creed himself. You know—Rocky’s punching bag. “No,” I tell her. “I’m a weatherman from Seattle. “Maybe you saw me on Good Morning America today?” I say, full of hope. The smile suddenly disappears. “No, I watch the Today show.”I sink slowly into my coffee and try to hide. Anyway, the postscript here is that the real Carl Weathers has a place in western Washington. One day years later, I’m dining out when whom to my wondering eyes should appear, but the man himself.

I told Carl my story of mistaken identity, which he gets a big kick out of. “Well, I know who you are,” he says with a big grin (Which does kind of look like mine, strangely enough). After a brief conversation we decide that someday we should switch roles to see if anybody picks up the difference. He really got into it when I pointed out that his last name is…Weathers!

There is nothing  like going national to get noticed locally.  Soon there I was showing up on the cover of  The Stranger with little 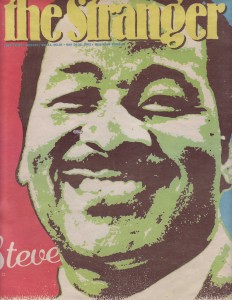 mini me’s scattered throughout the  paper. It all started when Dan Savage called me with an interesting idea. He suggested that The Stranger would sprinkle dozens of miniature pictures of my head throughout the paper. If readers were able to correctly count the total number of “Stevies” I would take that person to lunch. Sure enough someone came up with the exact total. Which I found amazing because I gave up counting after about three pages. But a deal is a deal So I took this nice woman to lunch. Dan Savage joined us and if memory serves I believe he picked up the bill. Given the location of some of the little Stevies in the paper, it was probably the least he could do. Sure it was goofy fun but I thoroughly enjoyed it.

Speaking of papers, I also did a stint with a weather column of the Seattle P.I. (When it was still being printed.)  Also, Seattle  Magazine slapped me on their cover more than once and I managed  a few “Best of Seattle” Plaudits as well. In fact, 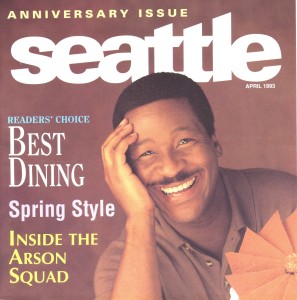 I have been named Seattle’s best weatherman  and best TV personality numerous times in Seattle Magazine and the Seattle Weekly’s “Best of Seattle” readers Polls. My mother was very excited about the ink that I was getting. I told her that I am already on  TV every night and this is a one shot deal in print.  She tells me “Yes, but now you’re in a magazine  & that’s really big!”