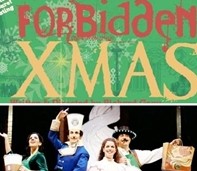 Many years ago a friend of mine told me that he had seen this live cabaret show called Forbidden Christmas.  It was basically a musical revue of various things that go on in Seattle during the holiday season. One of the songs was called ‘Steve Pool the weatherman’.  He told me you have to see this.  So I found out where it was playing and went to check it out.  Oh my goodness!  I have no idea it was a full stage show with music and dancing, costumes and a full size cutout of me.  A man by the name of Richard Gray, who is well known around Seattle for being a terrific songwriter and producer, wrote the song and choreographed the dancing.  I was absolutely floored and laughed out loud.  As far as I know the show is not being done at this time but I do have a copy of the song.

Audio clip: Adobe Flash Player (version 9 or above) is required to play this audio clip. Download the latest version here. You also need to have JavaScript enabled in your browser.

To see what the show actually looked like there is this YouTube video where instead of the cut out of me, I actually put in a surprise live appearance on stage with the performers.  Now it is a little fuzzy but you can get an idea of how the show was actually produced.  I have to admit when I first heard that this song about me was out there, I was flattered and horrified at the same time.  But I have to say joining them onstage was an absolute blast.If Richard ever decides to resurrect the show I will let you know. Click below the video to Check out his website and learn about this remarkable performer!