Wham!  And faster than it takes to say it, I was suddenly upside down cruising along at 500 miles an hour. Amazingly it felt completely normal. I was strapped in so tight and the view was so good that up-and-down didn’t seem to make a difference. Although it does make you think when you have to look up to see the ground.  That was just one of the many feelings and impressions I felt having flown several times with the Blue Angels 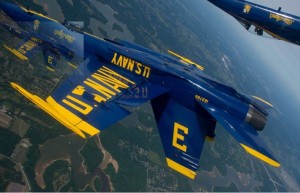 That’s me sitting in the jet just prior to takeoff

They are of course back in the Pacific Northwest for Seafair. For many people Seafair IS the Blue Angels, even though the hydroplanes and the Torchlight parade are certainly iconic as well. But there’s just something about the Blues. They are all about high-performance precision flying. But I can also tell you that when you get up close, you see that all they really do have physiques like Captain America. They’re not just pilots, they are supersonic athletes. The physical toll of doing tight turns and feeling the G forces that literally pull your head down towards your lap, are hard to imagine until you actually feel it.

For me it started when they put me in the airplane and buckled on that signature helmet. You look around at the myriad of gauges and switches and realize that this is a very complicated machine. Knowing quite a bit about flying, I recognized most things, especially the big yellow handle that says EJECT on it.  I made sure not to touch that one! (Unless needed of course.) 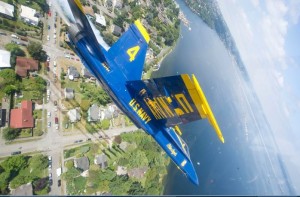 The biggest thrill however was being able to take the controls and actually fly the airplane. Yes, they let me do that. We were zipping around doing aileron rolls and other maneuvers that they actually use during the show.  Of course I was not doing it flying 18 inches from five other airplanes, and that is what separates them from us mere mortals. Apparently I was doing a reasonably good job because he didn’t suddenly yank the controls from me and say ” Let go, sit back and shut up!” 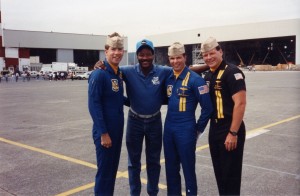 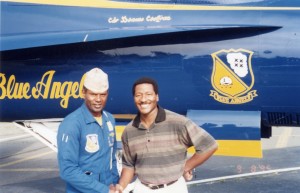 Truth be known I’ve always wanted to be a fighter pilot and I knew this was about as close as I was ever going to get. When we returned to Boeing Field I was literally soaked in sweat from the exertion and also one happy camper.

I have been fortunate to have been in contact with the team for nearly 20 years. I have developed and maintain friendships with a number of the pilots. In fact when I was dating my soon-to-be wife one of the guys arranged for me to bring her down to the airplanes and actually sit in the cockpit. Needless to say, it was a definite help in the courting process. I also got to know the number one Blue Angels, people like Donnie Cochran who commanded the unit for a time. It is their leadership that makes it all happen in the air and on the ground. 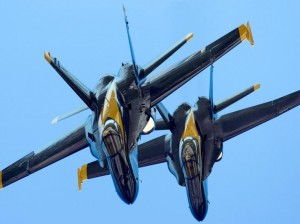 We all have experiences that will stay with us forever. Fortunately this one is re-kindled every year when I hear and see those sleek blue jets.