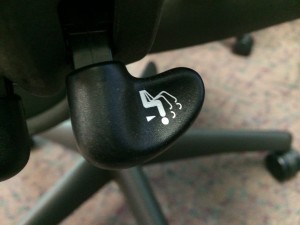 Has this ever happened to you ? You come in to work and  go over to your chair.  You know, the one  you have carefully adjusted to fit your rear end and the proper height for your desk. Then much to your chagrin, you find...
Read more
News & Info, SpeechesSeptember 3, 2014admin9 comments Permalink

Wham!  And faster than it takes to say it, I was suddenly upside down cruising along at 500 miles an hour. Amazingly it felt completely normal. I was strapped in so tight and the view was so good that up-and-down didn't seem to make a difference. Although it does make you think when you have...

Read more
News & Info, Old School, Television, Throw BackJuly 31, 2014adminNo comments Permalink
I've been waiting patiently to write this post for months. The 45th anniversary of Apollo 11 is here and it gives me a chance to talk about two of the most influential and inspiring people I have ever known. Like most of us old enough to remember it, I know exactly where I was when...
Read more
Appearances, Charity Work, News & Info, Television, Throw BackJuly 20, 2014admin1 comment Permalink
“Hey Steve, I didn't know you had a comedy troupe!” said a friend to mine on the phone. To which I replied, “What are you talking about?”  ‘Ha Ha “ he says. “No seriously, it's all over Facebook and YouTube!” So I Googled Steve Pool Comedy and lo and behold, there they were. So while I...
Read more
Appearances, Audio-Video, News & InfoJune 13, 2014adminNo comments Permalink

The Seattle International Film Festival (SIFF) is about to start up again. Thinking of that reminded me of the time when I was involved in the opening night of SIFF. I was asked to be one of the actors in a short film about a man who had seen way too many movies at and was slowly going crazy. He ends up being in a topsy-turvy world that is loosely based on the movie it’s a wonderful life. ”But in this alternate state the people he knows are are not doing anything close to what he expects.The film was shown on opening night several years ago. Among folks who play a role in the movie are Dale Chihuly, Howard Schultz, Tom Skerritt and me. At any rate, take a look and see how many people you can spot. Let’s just say in that world I’m no longer a weatherman. It’a about 20 mins. so maybe pop some popcorn.

Thanks to: Director/Producer Rick Stevenson who brought me into  the project.